So I think enough time's passed that it's worth taking another look at The Mara and see if I can rejigger it a bit. (Hey, it's over a year since I started that project... all good things to those who wait, I guess).

So right now, I'm in OneNote, breaking down the whole structure of the story. Ends up that my read through crew (Darci being the only person who actually gave me detailed constructive feedback so far - she's awesome) was totally right about a number of key things about the story.

So it's time to revisit it, restructure it, cut some of the chaff, break up some scenes which were 4 times longer than others (and boring) and find another way to throw that information around.

So I'm writing notes about each major story beat, trying to pull out the threads and see where it's lacking. Much easier this way in shorthand than by trying to do it the longwinded way (and deal with 90 pages of script). At least now I can see where all the bits lie, instead of the tangled version of it that lives in my head.

I'm no stranger to editing... I used to do at least three passes on every article I wrote. (I don't do that for this blog - I also don't plan out the articles. I'm not on the clock for this work, so... the hard part of the work is the first to go. I can spew out anything in a short period of time - cleaning it up, however, is where the hard part lies).

But hey, I need to edit my story. I already did 2 passes on it. Third time's a charm right? I read recently that M. Night Shyamalan did ten complete rewrites from scratch before he realized that Bruce Willis's character was dead.

Personally, that seems a little remiss to me. How can you write a story like that without knowing from the get-go what you're doing? Or where you're going? Maybe it's the programmer in me, but I take a very top-down approach to this whole thing.

I start with the global story, and then drill down to focus on individual parts, fleshing out the whole as it goes. Generally speaking, I always have a beginning, a middle and an end in mind. If I didn't, I wouldn't sit down and start writing.

Mind you, I didn't always do this. I learned after writing 58 pages of a time-travel novel, that going in without a plan - especially with time travel stories, (which are like mystery novels, in that every working part affects every other cog in the machine) - is something you absolutely don't do.

That doesn't mean you don't let the story evolve the way it should as it goes along... but it does mean that you don't go in without a road map. Change the map later - but have the map to start out.

Maybe this is why I'm not exactly prolific when it comes to screenwriting. I like to hone the idea first, and then start putting it to paper.

Another thing I've learned? The last screenplay I worked on was UNSEALED. Now, that one didn't have the full monté road map. It did have a core idea, and I built around that. The first version was 20 minutes long, and somewhat lacking - until I decided it was time to up the stakes and really pull out all the stops. And then it got really really good (in my opinion).

The difference here is that Joseph DeLorenzo and I spent a lot of time working on character. (One of these days, when I get access to a scanner, I'll put up my notebook so you can see what we came up with - there's about as much work that went into the characters as went into the actual script).

The way we wrote UNSEALED was to sit in a bar, and talk about story. And characters. I went in with a rough idea of the plot, and then we'd sit and figure out every aspect of those characters we could, figuring out scenarios we could put them in, character traits, their likes, their dislikes, their relationships. (Phil and D.K.? By the way, although it's never spelled out, a long time ago they had a gay relationship - mainly because Mortimer and Scarlet were so busy doing each other, and they had no-one else... so they decided to screw it and screw each other. It's subtle, but it did make it into the script - they have a certain ease and familiarity with each other borne of that relationship).

And then, at night, I'd go home and write the script. We'd get together a day or two later, and finesse the dialog (Joey was great at pointing out when lines could just be entirely left out, or conveyed with a gesture instead of a line of dialog - I guess that's the true hallmark of a great actor).

But the crazy thing? We had the characters 80 or 90% figured out before I sat down to write the screenplay. And it's still my favorite thing I've ever written - in fact, it's one of a myriad of reasons my tattoo is what it is. (It took 15 years to decide on what to get; if you're going to stick something on your body forever, you'd better make sure you have a good reason for it). 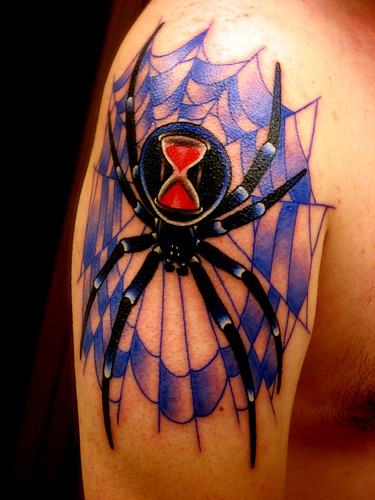 I think one of the bigger mistakes I made with THE MARA (aka Little Miss Litty) was assuming that because I'd had the story rolling around in my head for about 12 years, it was all figured out and good to go. I'd never intended to tell a long story with it - just a short story. So there wasn't any room for character development.

Well, since working on UNSEALED, I've decided that I really like the character development approach. It gives you a lot to draw on.

And I completely ignored that for THE MARA. Talk about lame. Ah well, part of that rewrite is going to be coming up with completely fleshed out character sheets for all of the characters too. Let's see where it goes.

Because if you do the character work, everything a character does will be informed by it - even at a subliminal level. And that character definition will make your work more complex, more real, and more believable - even if you don't spell it out in bright neon lights.

Stumbled across your blog whilst searching for a cure for Brain fade. In your entry back in April, you mentioned a new supplement regime has worked. Is this still the case, and if so what doesage do you use.

I really hope it does, cos i am desperate!