In 2004, I went to Peru on a whirlwind tour of Lima, Cusco and Maachu Pichu (you know, the place where the really cool lost Incan city is). 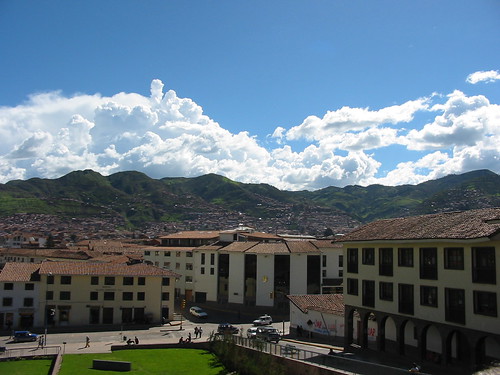 The city of Cusco, Peru. A place where Toilet Paper is PURE CONCENTRATED EVIL.

One of the things that struck me while I was there was the odd realization that toilet paper was almost taboo.

No, seriously. It was.

Apparently when the Western world decided to descend again on the Peruvians, and tourism took hold, one of the first sights that they saw was the incredibly scary one of large quantities of used toilet paper happily floating down the Amazon river.

Given that the Amazon was the source of all their water, and Maachu-Pichu especially is near the very beginning, needless to say they were a little perturbed by this turn of events.

Which is why in every bathroom you visit in Peru (except perhaps Lima), you're expected to stick the used paper in a little bin by the toilet.

Needless to say, this can be quite disconcerting to the Western traveller, but trust me, you'll get used to it.

What does this have to do with the Plastic Vortex of Doom?

Well, it's kind of the same thing, except on a much larger scale. Except instead of toilet paper floating down the Amazon, we now have a huge vortex (known as the North Pacific Gyre) which is filled with plastic bottles, plastic bags, and in fact all kinds of other plasticky things - mainly because, unfortunately, plastic doesn't biodegrade. At all.

In some places - and bear in mind that this gyre is the size of Texas, so "some places" are areas the size of cities - the tiny plastic fragments outweigh the plankton by a factor of 6:1.

This man fished all of this plastic out of his beard... er... I mean, the ocean.

As you can imagine, this is a bad thing - for the environment, and for us as a species. The plastic also soaks up all kinds of man-made toxins (PCBs, DDT, and lots of other three letter acronyms for PURE CONCENTRATED DEATH). And then, the fish eat the plastic. Because it's in their plankton.

You can see the documentary the screengrab above was taken from here. And I highly recommend that you watch it. Be warned - it's scary stuff (ecologically speaking).

As stewards of this planet we're whizzing through space on, we're not doing a tremendously good job. I must admit it gave me pause thinking about this as I put my tomatoes in a bag at the store today. I've already started using reusable bags for everything (when I can remember to bring them into the store)... but plastic is used in so much of our packaging and everything else in our lives, that I fear it's a losing battle.

Do you have, plan on having kids?

I don’t - it’s my effort to be green. I wish more people would be green this way. It’s much more productive than a Prius. They could introduce a 3 door Prius!

Think of the diapers, bags, clothes, gas I am saving.

Informative AND funny. Who’s the hot guy with the beard in the photo? Sorry I had to ask.