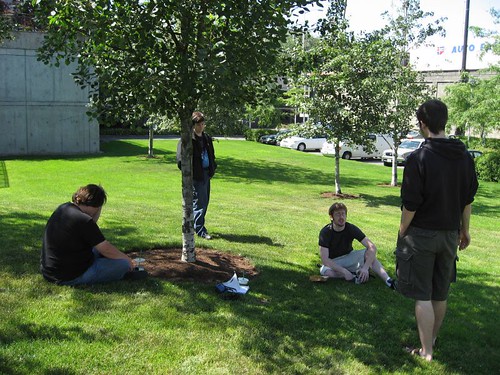 So just how do you get a team together, keep them working together, keep tensions low during high-crunch periods of time, and just generally make sure they rock the house?

I've got a secret little trick that I figured out while I was managing the Gameplay Programming team at Surreal. (Actually, I discovered some of this while managing the Tools Team, but I refined and codified it when I moved to Gameplay).

We moved to an Agile project management method (kind of based on Scrum) at Surreal in October 2005. Now, people have varying thoughts as to whether or not it was successful or not - but that's for another post - but the upshot of it was that we ended up having two Gameplay team stand-up meetings a week.

One of the things I did early on after moving to the Gameplay team - given that we had two meetings a week - was to look at exactly what those meetings were doing for the team. It ends up that really, the meetings had several purposes:

Now, 1) we were already doing via email, and 2) was good, but kind of out of scope for a 15 minute stand-up meeting (it'd expand the meeting for one). 3) seemed like a great thing to me, but needed more flexibility.

By this point I was already doing 1 on 1's with each team member, once a week; these were working well, and mainly I was using them to allow for private conversation about things that were bugging each team member, and to resolve inter-personnel issues, find out what was blocking them and so on.

And of course, Summer hit. And we were in crunch. Again. (We crunched all the way through the previous summer on Suffering: Ties That Bind... I was working 14 hours days on weekdays, and 8 hour days - sometimes longer - on weekends for three months).

Now, Summer in Seattle is a gorgeous time. After spending all winter under oppressive gray skies, everything flips and Seattle becomes one of the most gorgeous places on the planet.

I'd be damned if I was going to miss it again. So I decided to start a new practice. 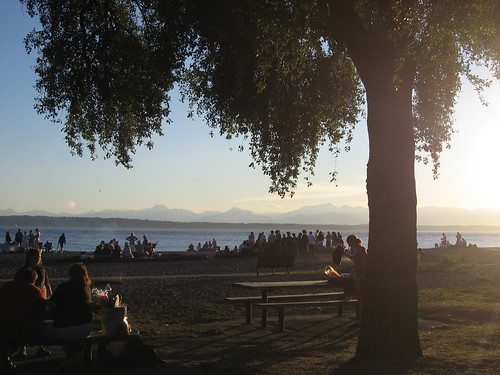 Summer at Golden Gardens in Seattle - Seriously, it's what makes the rain worthwhile.

The Friday Gameplay Team Meeting was something I instituted at Surreal, and it works great for keeping your team together, focused and happy. It's now an institution at Surreal - even though I've not managed that team for over a year, which shows some of its staying power.

Instead of two Scrum meetings a week, I cut it down to one formal meeting, and one informal meeting (where I'd take notes if necessary; later we modified this so that notes weren't necessary at these meetings - I'll cover that later). The informal meeting was at 2pm on Friday afternoon, downstairs on the grass field outside the building. (The grass field no longer exists; which is ok, because we're no longer at that building). People were encouraged to bring beer (Friday at Surreal is Beer & Pizza friday). The meeting itself? 30 to 60 minutes long.

Over time, the meetings evolved to include a short soccer kickaround during the summer and early fall. These stopped at the new building because there's no field nearby, so we just meet out on the deck which overlooks the Puget Sound. The beer's still there though.

People swap notes and kick around ideas (and, I guess, soccer balls). They talk about the movies they're going to see, what's cool on TV, cool games they're playing (including ours), maybe a bit of what they're working on, and life in general. There's lots of joking around, a little bit of teasing, and usually very animated conversation. Some people (with nasty bad habits... er... like me) smoke.

It all seems very much like just an organized excuse to goof off. That's because it is. But if you dig a little deeper and look under the hood, there's some very specific reasons why I do it this way.

The Inner Structure Of The Goof-Off Meeting 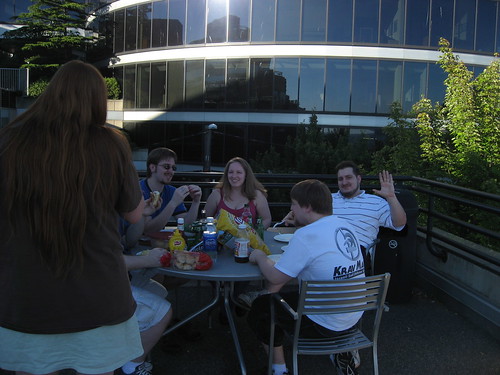 This isn't actually a Gameplay team meeting - but it's what one looks like in the new building (it's held right here on the deck, and usually there's that many people there. And the two people on the left (Darci Morales, Surreal Producer, back to the camera, Matt Lauritzen, Gameplay Programmer Extraordinaire, in shades) are usually there too. This photo is actually from the Surreal 2007 4th of July BBQ on the deck at work, where we got fantastic views of the fireworks show.

There are several key reasons for holding a meeting this way.

1. It Gets People Away From Their Coworkers

Games development is a pretty high stress environment, and I wanted to make sure that my team had a place that was safely away from potentially prying ears and eyes of their coworkers, so that they could feel comfortable discussing anything they wanted to - including the things that other people in the company are doing that are bugging them.

This is normally a 1 on 1 subject, but this also allows the whole team to voice what's derailing them - without fear of retribution. (And if you institute something like this, it's important that there will not be retribution. Handle the problem there and then by explaining the other side of the issue - as their manager you should understand the other side of the issue; if you don't, you're not doing your job - or by promising them that you'll look into it. Don't bear grudges. Don't throw blame. Don't be quick to judge. If people are bitching about something, there's something to it).

2. It Gives Them An Opportunity To Vent

Related to #1... unlike regular meetings, this meeting - and I told my team this going into it, and repeated it regularly - is meant to be a "stitch and bitch". And yes, they should. It's healthy. But keep it in check, and address misconceptions where you can.

For example, one issue that comes up regularly near the ends of projects is the fact that programmers don't like getting bugs filed against them for content issues. They hate having to help Designers fix content that (they feel) should have been set up correctly in the first place. The job of the lead in this situation is to remind them that hey - guess what - designers aren't programmers. Part of your job as a programmer on a game team is to help the designers get their job done - and occasionally, that means holding their hands. Because god knows, they get to deal with our bugs all the time ;-)

3. It's Not An Office Or A Conference Room

There's a mental gear shift that happens when you get a team out of the office. This is why Marketing & Sales guys get to have expensive off-site retreats in ski lodges all the time. Well, no one pays for the geeks to ever do that (or if they do it's rare, or reserved for upper management), so this is the closest thing you can do without having to explain it to the Finance guys.

When you're out of the office, you can let your guard down, and let politics go by the wayside a little. You can be more objective about your work, and you can be more creative because you're removed from the issue. The creativity part is a big one - it gets your team's juices flowing.

The moment the conversation turns to the game you're working on - and it will, because most of the team spends nearly every waking moment working on it or thinking about it; you just can't turn that kind of passion off - you're going to get a torrent of ideas that will blow you away.

Take a notepad with you - there's gold in there.

Yep, you knew it was coming. Part of the idea of goofing off is to goof off. Just a little bit. It's Friday, people are already thinking about the weekend anyway. This just codifies it as something that's okay to do.

Why would you want people to goof off during work hours?

This is a team that's going to go through hell and back for you. They're going to put off doing their taxes, their laundry, and their utility bills because they're at work at 9pm on a Saturday night trying to get the game out for its next milestone. They need to work together as a cohesive unit. Everyone needs to know what everyone else is working one. You need to know who's stressed out the most, and who's got a low workload - and this is a way of letting that work auto-balance itself. People will and do offer to help each other out during these meetings. But they'll only do that if they trust, respect and are friends with each other. (You can of course force it yourself and shuffle the workload for them, and you should do that as well, but this way they all feel like they're all in it together).

Think of it like being in the military. You're the Sergeant of your platoon. They're your men. What does a platoon do during downtime? They hang out. They build camaraderie. They become friends, and turn into a close-knit, well oiled fighting machine. And that's all you can ask from a team - have that, and you've got the best team in the world.

But you're not in the military, so they're going to go home after work. So do it at work instead. And give them a place to relax while at work - seeing each other day in day out, it's something your team needs. It's therapeutic.

What do you need for a successful Friday Meeting like this?

The Friday Meeting (or Goof Off Meeting) is an excellent tool for building team morale and cohesion. It's also great for getting information on the team's status in a way that isn't formalized, allowing you to fix problems before they become real issues.

It's now a part of Surreal tradition (at least for the Gameplay team), and has been successful enough that when programmers move to other teams, it's one of the things they miss the most about the team. That's ok - we let them come along to the meeting as well if they have time. In my ideal world all of the teams would have one meeting a week that was like this - it really does help.

Next time I'll talk about team morale, and I'll explain how I try to show the team that I appreciate their efforts.