I just saw a trailer for this movie-in-progress: Killerweed. It’s linked below so you can check it out for yourself.

Please go give it a digg, and if you’re interested in investing, hook them up. It looks cool :)

My guess for Nathan's power?

He can make shapeshifters show their true forms.

Gallagher's Law: If a demonstration can go wrong so that the first three rows of the audience will be splattered with something, it will.

Note that the amount it will go wrong is proportional to how difficult it will be to get out the substance, how much it stains, and how many audience members are wearing dry-clean only clothing.

If tiramisu is a courtesan, trifle is a low-rent whore boozed off her tits on sherry, wearing clown makeup.

And yet I still love her.

This review is for the XBOX 360 version of the game.

Where’s Judy Garland when you need her?

Its been quite a while since I’ve written a review for a game – ah, the heady halcyon days of being a writer for Your Sinclair magazine seem so far away in the past. (And frankly they are; that was 16 years ago, so if you remember that mag, you’re getting old). But I really wanted to write a review for this one. Especially because there don’t seem to be any out there. (I don’t want it to fall through the cracks either – a lot of people I love worked very hard on this one, and they deserve some kudos for their work). 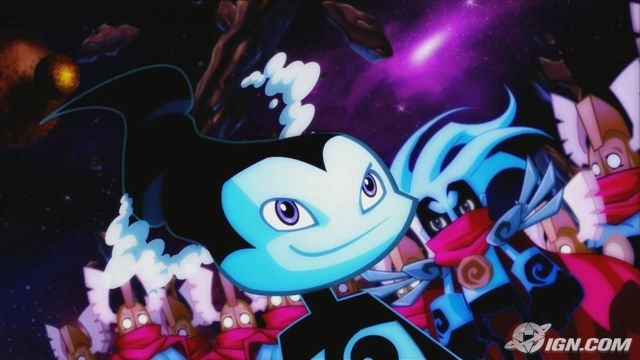 So What Is It?

You play one of a mighty band of Wind Warriors, set out to help their intergalactic friend in a story which is at best over-complicated, and at worse teutonically over-complicated. It’s probably easiest to look at it this way:

It’s pretty much a hoover-‘em-up, in the best tradition of Katamari Damacy, and all of its spawned ilk. Except instead of rolling around a ball, you’re a little guy who carries around his own personal tornado. Kind of like having the tornado-in-a-can from Mystery Men, or Taz the Tazmanian Devil on crank.

You start out as a little dust devil, and as you pick up more stuff, you become much bigger. Wayyy bigger. As you grow, you can suck up a wider swathe of the landscape around you, like Robin Williams trying to clean up after sneezing into his lines of coke.

Small things abound to suck up at first – plants, rocks, bushes – and quickly you start moving onto larger fare, including tanks, cyclotrons, Elvis impersonators, and most of the Vegas strip. Nothing can stand in your path, and everything satisfyingly (and sometimes comically) breaks into a bajillion pieces as you strafe past it. Or gets stripped to its underwear. Depends on what you zip past ;-)

So you’re probably thinking “OK, I get it. It’s a Katamari clone. Where’s the pizzazz? Where’s the elan? Where the hell is the new gameplay that allegedly gets gamers salivating?” (As if a well-executed game wasn’t enough in these days of very hit-and-miss titles).

Ends up that the reason you’re in the middle of all this is because some nasty mischevious elementals called “Fire Fliers” are running around causing all kinds of havoc. You’ve got to hunt them out and get them before they turn the Earth’s crust into the kind of lava-spilling soupy mess that extraterrestrials love to inflict on us. Except there’s no Will Smith coming to save the day.

The FireFliers (which you have to collect against a time limit to make it to the next level) add a new dimension to the gameplay. Holding the right trigger lets you suck them up and hold them in place; the more you can string together, the more time you get added to your clock when you finally release it.

Ah, but there’s a catch. The longer you hold the trigger down, the more your tornado slows down, until you’re moving at a crawl, desperately trying to string together the last piece of your combo. Instead of just being a hunt around the world to find the next bigger thing to hoover up, this adds an element of strategy as you try to balance adding time to your clock with getting quickly around the level.

As you make it through the game, more moves become available to your tornado (stomping and ramming), unlocking other gameplay features.

There’s also a race mode which comes before the boss battle in a way that’s very reminiscent from the old 80s Aliens game (where you fly through the pipe to land your dropship at the start) or the chill-out mini-game in the middle of Tempest 2000.

Funnily enough, when it rains like this at MY barbeques, the tiki torches never stay lit like that.

Speaking of boss battles; it’s a button mashing frenzy as you try to take out the totems, and a kind of mini game of Frogger as you try to make your way to them across the landscape, dodging fiery missiles and patches of sunlight which will fry your tornado.

So What’s The Skinny?

All in all, this isn’t really a next-gen game. But that’s ok. It looks great even if it doesn’t have specular lighting and normal maps everywhere – and to be honest, like Katamari (there goes that comparison again), it would probably suffer from looking flashy and shiny. It also doesn’t matter, because there’s a huge amount of particles, debris and flying cows hurling through the air at any time.

The game suffers a little from having you stay in the dark the whole time (so that your tornado doesn’t fry, and also to hang a lampshade on the boundary on the playing field). So everything looks a little gloomy at times, but I can excuse that.

There’s a bit of depth of field here and there, and the draw distance is pretty cool. Audio is pretty neat, with a great bombastic cinematic soundtrack, and cool sound effects for everything that you smash and pick up.

Well, yes. But they’re not dealbreakers.

But all in all, these really don’t matter. You’re not going to sit on the title screen for long anyway, and everything else just melts away as soon as you start playing the variety of levels and go on a destructive frenzy.

Ultimately – and most importantly – this game is FUN.

Go on. Pick up a copy. You owe it to yourself – and your kids.